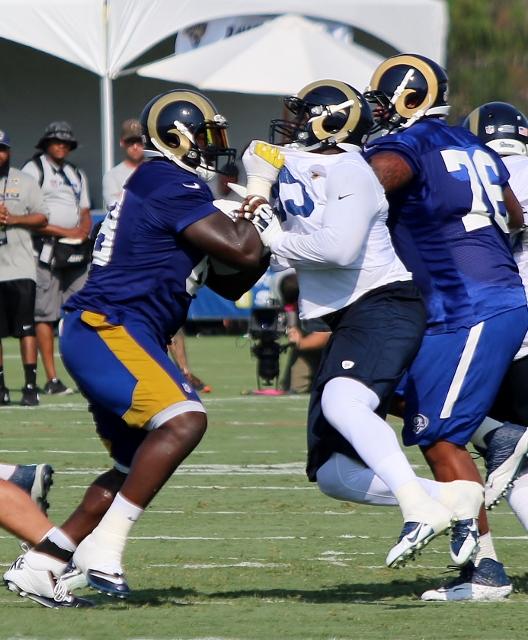 Time to Get Physical? Will the Rams’ slow starts on Sunday put the season in jeopardy? (Photo courtesy of Duane Barker/MVS)

Stuff:
Cardinals: The defense is…okay. But it’s not great getting to the quarterback. If Aaron Rodgers gets time, he’ll bring the Cards back to earth on Thursday night. And that’s when it will get interesting—has Arizona dealt with any adversity this season?
Rams: Horns up! Yada, yada, yada…LA’s had a series of slow starts this past month. You can fake it for a while, but eventually it catches up. Question: This team doesn’t have a blocking back or a blocking tight end—is that going to be a problem?
49ers: Looked like garbage on Sunday night. Is Kyle Shanahan done if this team ends up with eight or less wins? I don’t even know his annual wins over Sean McVay can save him.
Seahawks: The last time Geno Smith looked good he was going 95 yards against the Rams and Raheem Morris’ defense. Monday night he looked absolutely XFL. Time to give Geno’s Pizza a call. Feels like this could be Pete Carrol’s last rodeo.

Stuff:
Packers: Going to Arizona on Thursday without Devante Adams and Jaire Alexander. If they pull this off, Zen Rodgers gets placed MVP discussion.
Vikings: The Norsemen have great safeties and a good pass rush. It might be the formula to derail Dallas and to put some heat on the Packers.
Bears: The media is scum. “Play Justin Fields! Play Justin Fields!” Fields plays, and plays horribly, and it’s all the offensive line’s fault. “He didn’t have a chance!” Okay, he didn’t have a chance, so why did you want him to play and take the kind of beating he did (5-turnoves, 4-sacks) in Tampa Bay?
Lions: Where would the Lions be if they had a quarterback. You could make the argument that they’d be 3-4…with a Rams pelt hanging on their wall.

Stuff:
Cowboys: They come off a bye and go to Minnesota. Yes, the offense (according to PFF) is ranked number one overall, but the Dallas defense is ranked 21st, and its special teams are rated 20th.
Washington: Have to go to Denver this week, but the good news is the Broncos will be there. It’s been a lousy season, but DC can still get after the quarterback. DT Jonathan Allen is playing very well.
Eagles: This team is in position for a breakthrough—make that provide a breakthrough—for the Detroit Lions to get in the win column this week.
Giants: It may be hyperbole, but after being given up for dead against the Rams, Daniel Jones Has Risen From The Grave!!

Stuff:
Buccaneers: Who is like Tom Brady? Who is able to make war with him? Defense is playing just well enough—now. But will need to be better against the Colts, the Bills, and even the revitalized Falcons.
Saints: You can see Jameis Winston growing by the game, and have to wonder where he’d be in his career if it began with Sean Payton? But while Winston’s developing, is it fast enough for the Saints who have a shrinking Super Bowl window.
Panthers: Sudden Sam has become Sad Sam Darnold and the Panthers season has cratered with four consecutive losses. They may not have the right quarterback…but things will get better on Tobacco Road.
Falcons: Atlanta’s not good, but dangerous. That makes them good enough to beat the Saints and Panthers—and put a scare into the Bucs.

Stuff:
Chargers: Have to believe they’ve done some yelling and mending since experiencing the Baltimore Blast two weks ago. And fans have to believe the Bolts will be active before the trade deadline.
Raiders: On a bye week at a perfect time. Darren Waller and Josh Jacobs get a chance to heal. QB Derek Carr and CB Casey Hayward Jr. playing some of the best ball of their careers. And the pass rush is number one in the league. So, Viva Las Vegas!
Broncos: Was it Foreigner that sang “You’re as cold as ice”…? Welcome to Broncos football. Football stats and analytics are skewed when Teddy Bridgewater is ranked as the 20th best QB in the NFL ahead of Carson Wentz, Ben Roethlisberger, and Trevor Lawrence. In football—you still need eyes. It’s not like baseball where everything is likelihood. And our eyes tell us that Denver is bad.
Chiefs: Andy Reid needs to scale it back and run the ball. I don’t care who runs the ball, as along as it isn’t someone named Patrick Mahomes. Do whatever it takes to keep the defense off the field. And wear down the Giants at Arrowhead.

Stuff:
Bengals: This team is rising to legit status. I can’t remember the last time one of their players was arrested. The win in Baltimore is causing people to rethink HC Zac Taylor.
Ravens: If the defense is on, and it’s not always on, all is well. If it is off, it puts too much of a burden on Lamar Jackson. Who can do everything, but how long are they going to keep expecting him to do everything.
Browns: Cleveland gets the Steelers, Bengals, and Patriots over the next three weeks. Two of those three look winnable—but to Pittsburgh and New England are going to have to play like Denver. That’s a problem.
Steelers: It’s a good thing Dave Tomlin put the USC rumors to rest…Whew! Now he can focus on making sure his team runs the ball against the Browns this week. If the Steelers can’t run, Big Ben is dead.

Stuff:
Bills: After a bye, should take care of Miami this week. This is the class of the AFC, but they can’t afford to believe they are the class of the AFC.
Patriots: Thinking is they’ll get blasted by the Chargers in SoFi this week. But New England has a way of rising to the occasion. Mac Jones is developing, the team is improving, and I am predicting they will…come up just short.
Jets: Mike White, Joe Flacco…there’s nothing left to say. What a brutal existence Jets fandom must be.
Dolphins: Organization seems more excited about acquiring Deshaun Watson than focusing on Buffalo and the rest of the schedule. I wasn’t a big Tua Tagovailoa fan when he came into the NFL…but the way he’s handled all the trade talk regarding Watson, his job, and imminent departure has been all class. I hope Tua time comes and I hope he makes the Dolphins pay.

Stuff:
Titans: Remember when this team lost to the Jets? Not many do, nor should anyone remember. They’ve been fantastic but there are times they can lose focus. And they shouldn’t be thinking about the Rams in two weeks when they have the Colts this week.
Colts: Indy’s going to have to be exceptional to go on a run and make the playoffs. But if they could pick off Tennessee this week…the worm could turn. The Ravens secondary is so-so, the Colts receivers are excellent…So yeah, it is possible.
Jaguars: Do not sell the Jags short in Seattle on Halloween. The Seahawks are currently a nightmare and if the theory of “Best Quarterback Wins” is true…then Jacksonville and W number 2.
Texans: This season will be a success if Houston can unload Deshaun Watson…good for them. They should make it better by moving other pieces. Brandin Cooks, Danny Amendola, and investigating what Seattle would be willing to surrender for Tyrod Taylor.