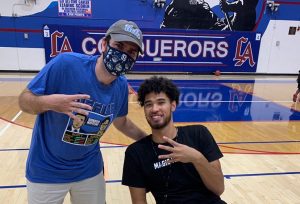 Reacting to the First AP Top 25 of the Season
The Preseason AP poll has been released, and while the AP poll means very little in the big picture, in the small picture it provides two immediate benefits: there’s something concrete to debate about… and the college basketball season is inching closer.

Gonzaga was a near-unanimous choice for #1, marking the second consecutive season the Zags have opened the season at #1. They ran the table in terms of AP ranking last year.

The Big 10 is represented well in the “others receiving votes” as they have the top two vote getters in the category, Michigan St and Indiana, as well as Rutgers. Iowa, however, was the highest ranked team from last year (#8) to not make it in this season’s preseason poll.

Bruin Bias
This week’s Bruin Bias will answer the biggest question pundits are posing about the Bruins:

Are they more like the team that won 5 games during March Madness, or the team that ended the season 0-4, including blowing big leads and an upset in the PAC-12 Tournament?

My answer? UCLA is closer to the team we saw in March. One of my biggest pet peeves about discussion about the losses is the lack of context. Yes, they were losses in games UCLA held significant leads and should have won – but the situation matters:
L @ Colorado
L @ Oregon
L vs. USC
L Oregon St (neutral)

Look at those four teams: 2 were on the road in two of the toughest places to play, 3 of them were the top 3 teams in the PAC 12, all of them won at least one game in March, 3 teams made the Sweet 16, 2 made the Elite 8. The teams were good, borderline great, teams last year. Let’s stop acting like UCLA lost four games to cupcakes to end the year.

On top of that… let’s look at the context of those close games: UCLA had the lead in the second half in all of them… and blew leads. That is something the Cronin-led Bruins did not do at the end of the 2019-2020 season… and it’s something they did not do in March. In fact, they were one of the best teams at the end of games in March (that’s how you advance). Pundits are acting like March Madness is a small sample size when a) the 6 games UCLA played in March are more than the 4 games often referenced, and b) the majority of UCLA’s games in the calendar year of 2020 and 2021 mirror the March games more so than the end-of-season games.

Okay… rant over. I am extremely confident in this year’s team. I won’t be going around claiming an undefeated campaign or guaranteeing a championship, but I fully expect UCLA to play deserving of their ranking.

In any case, I cannot wait for the season to start!