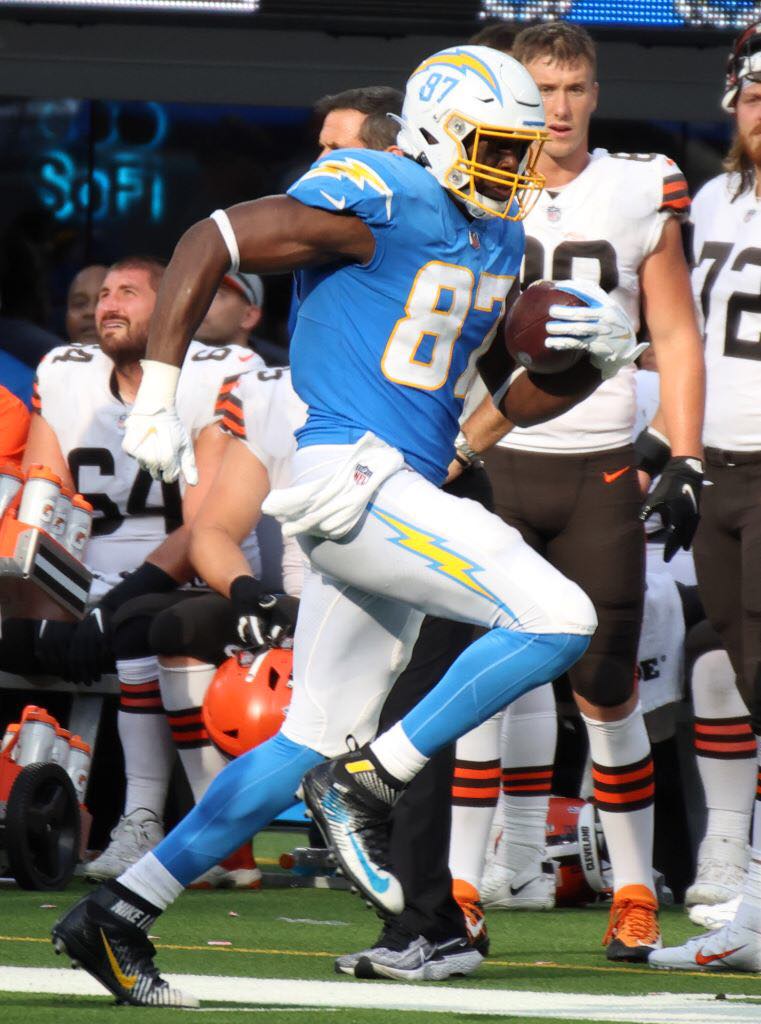 How important is Jared Cook to the Chargers success going forward? (Photo courtesy of Duane Barker/MVS)

Stuff:
Cardinals: I actually followed the 1974 St. Louis Cardinals team that started 7-0…I had a thing for Terry Metcalf. Not overwhelmed by Arizona’s talent (Still believe a bill will come due), but impressed more by their grit. This is a good football team that can win big games.
Rams: Shouldn’t have a problem against the Lions, but I get the feeling Tennessee got their attention after beating Buffalo Monday Night. Amazing what the offensive line is doing. DeSean Jackson only played nine snaps—excellent. Save him for when it counts.
49ers: Anytime Frisco gets a bye they’re happy. No team needs opportunities to heal more than this one. To be something more than a middle of the road team, they need Jimmy G. back. Might have trouble with the Colts.
Seahawks: Lucky to hang as long as they did with Pittsburgh. This team was struggling with Russell Wilson, and without him they’re drowning. The decision by the Rams to let Gerald Everett walk to the Emerald City looks better every day.

Stuff:
Packers: Get Washington at home. It will be a disappointment if they don’t score at least 45. Missing Jaire Alexander on the corner, but should be okay for another week. Offensive line has been better than expected.
Vikings: Kirk Cousins has earned much of the heat he’s taken the last few years. This year, he’s made some big throws and deserves credit for holding the Norsemen together. On bye this week.
Bears: The defense is starting to show up while Justin Fields and the offense is being well-guarded. But I don’t think they can play it safe against Tampa this week. Bears coming to a point where they have to decide if they’re playing for this year or next. Next year might not be what HC Matt Nagy wants, but what Fields needs..
Lions: Is it Tim Boyle time yet? If not now, then by the third quarter this Sunday when Jared Goff goes to the bench. Detroit has seen all they need to see from Goff and they’ve already they’ve gotten the best they can from him—Two first round picks from the Rams.

Stuff:
Cowboys: They should just hang their division banner now. There’s just enough sloppiness in the talented defense that makes me believe they’re cruising for a bruising. Some snake is going to get them in the tall grass. On bye this week.
Washington:  It’s excusable to give up 30 to KC if they hadn’t given up 30 to everyone else they played. DC was a playoff team a year ago. Other than Miami, no team in the NFL is more dire need of a shake up than this one.
Eagles: If they can get to nine wins they should be given a parade. But to get to nine wins they’ll need to reintroduce Miles Sanders to the the offense. I do not understand is lack of touches. But if they’re not going to use him maybe they can let the Rams borrow him for a while.
Giants: The problem with this team is not Daniel Jones. It’s the fragility around Daniel Jones. Season is lost. Stupid contract given to Kenny Golladay. Trade Saquon Barkley now!

Stuff:
Buccaneers: The front office has made calls to Ronde Barber, Lester Hayes, and Mel Renfro to see if they can take a few snaps in the secondary. Other than that…everything is fine in Tampa Bay.
Panthers: Bad news is they are riding a three-game losing streak. The good news is they go to New York to play the Giants. And the HC is not happy with the OC’s play calling. Besides the G-Men they get Atlanta and New England before facing Arizona in mid-November. So there’s a chance to right the ship.
Saints: This team always does the opposite…but going up to Seattle you still have to pick them. Sean Payton needs to let Jameis Winston stretch the field on the Legion of Poof…And they’ve got a rested Alvin Kamara—to which my fantasy team shouts “Hallelujah!”
Falcons: Deserve a little more respect than they’ve be getting. I love tight end Kyle Pitts, and Matt Ryan is completing 69% of his passes with a 10/3 TD/Int ratio. After a bye, it’s on to Miami with an opportunity to get to .500.

Stuff:
Chargers: So Indy can put 25 on Baltimore, but the Bolts only six? After giving away the game against Dallas in Week 2, the Chargers needed to be on the receiving end of a butt-kicking. They got it and now they have a bye week to stew.
Raiders: The new narrative is now they are winning, or will win, because they’ve been freed from the oppression of Jon “The New Hitler” Gruden. This team is winning because they’ve got the best rated pass rush in the league to protect a flimsy secondary.
Broncos: What’s interesting about Denver? Not much…we now know who will finish last in the West. So maybe it’s time to give Drew Lock his final call before moving on. It’s clear this team needs a quarterback.
Chiefs: Everyone had KC placed in an oblong box, not us. We just recognize the holes that are still there. Now they get a tough match against a team—Tennessee—that loves to run the ball.

Stuff:
Ravens: How do they get torched in the air by Indy, but shutdown the Chargers a week later? Lamar Jackson’s playing the best ball of his career, but I’d like to see how he’d fare without Mark Andrews. The Baltimore TE has got to be the the best security blanket since Linus Van Pelt picked up that blue one.
Bengals: The convincing win against the Lions after a heartbreaker against the Packers is evidence this franchise has turned a corner. Keep Joe Burrow upright, and keep feeding Joe Mixon. Big showdown in Baltimore this week.
Browns: Case Keenum gets the call on Thursday night against the Broncos. True, the Browns are banged up, but that’s the price of admission. Everybody’s going to get banged up. If Keenum can do what Baker Mayfield is supposed to do—make an occasional throw/manage the offense—then why do you have to give big money to Baker?
Steelers: Good win against Seattle, but they needed a big play to wrap it up. Now they get a bye, get a chance to get healthy, and time to prep for the Browns, Bears, and Lions.

Stuff:
Bills: Did not play well in Tennessee. Should have won. Going for it on fourth down at the end was a good, but the play call stunk on ice. When you have Josh Allen, you have options, and the Bills did use any of them. A good loss to help them refocus.
Patriots: A couple of plays here, a couple of kicks there, and this team is 4-2 and not 2-4. Losing games they’ll be winning in another year. If they can hit on a few more draft picks they’ll be a playoff team, but the dynasty—just in case you didn’t know—is dead.
Jets: Not good, but not disappointing. They are who we thought they were. Did you know the offensive line—according to PFF—is ranked 14th in the league? They’re listed 8th in run blocking. Connor McGovern is having a solid year at center. So smile.
Dolphins: Giving up too many points, not scoring any points, presto-chango and now they are the most disappointing team in the NFL at 1-5. They’re not who we thought they would be. Terrible. Couldn’t be worse and someone should be canned. Not sure who, but someone should be made the example. How about decimation? One of every ten Dolphin employees gets a pink slip for this debacle.

Stuff:
Titans: I love teams that run, but this team is the girl you’re gonna have a good time with but never commit to. They’ll pick off a big win every once in a while, but do you see this team doing anything beyond winning the division?
Colts: This team is good at stopping the run. The pass rush suffers and so does the secondary…but they go against a team (49ers) this week that doesn’t pass the ball very well. Offensively, I’d like to see a little more Michael Pittman Jr…Only 43 targets, and just one touchdown. No bueno.
Texans: The next two weeks the Texans get the Cardinals and the Rams. It’s a good thing they got that “W” in Week 1. WR Brandin Cooks should expect to be on the move again—if the front office is thinking.
Jaguars: Trevor Lawrence got his first win. It might not be pretty but it’s coming together in Jacksonville. After a bye this week they get a chance to take a bite out of the Seahawks. Edge defender Josh Allen played his best game against Miami. If he can be what was expected when taken 7th overall in 2019. The turnaround can come to Jacksonville sooner rather than later.

Stuff: It looks okay…but no…it’s not good. Very mediocre, especially if you think you know anything about football. The untrustable are as follows: Saints, Browns, Titans, Washington, Panthers, and Falcons. Trustable: Rams, Cardinals, Tampa Bay, Buffalo, and Baltimore.