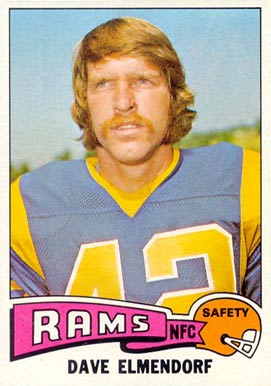 The Rams drafted Elmendorf in the third round, 63rd overall, in 1971 out of Texas A&M.

Standing 6-1/195, the former Aggie not only played nine seasons for the team but also started all nine seasons.

His stats include 27 picks, plus three more in the post-season.

Elmendorf’s final game for the Rams was Super Bowl 14, where, initially, he got the blame for Eddie Brown’s blown coverage on John Stallworth early in the fourth quarter. (You know, the one where Eddie Brown hung Rod Perry out to dry. This is why Eddie Brown will never be allowed in the RamCave.)

Though film and review cleared Elmendorf, his solid and consistent play has been largely forgotten. Though he never made a Pro Bowl (voted 2nd team All-Pro in 1975), he had a fantastic career, especially when you remember that he was a third-round selection.

Last Add: The pick used to acquire Elmendorf was one of seven acquired, along with Marlin McKeever, from the Washington Redskins for: Maxie Baughn, Jack Pardee, Myron Pottios, Diron Talbert, Jeff Jordan, John Wilbur, and a fifth-round pick.