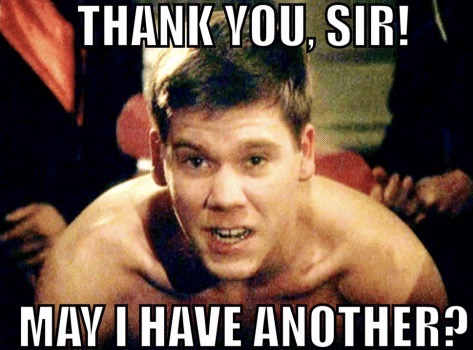 Stuff:
Cardinals: Injuries are still mounting—Chase Edmonds now—but this team keeps competing. Winning on the road, against a division opponent, with a backup quarterback just doesn’t happen. It’s like going to Burger King and not getting sick.
Rams: Sean McVay gets another chance to prove that Kyle Shanahan is not his daddy. I believe anything wrong with the Rams can be fixed by a better scheme…and with a healthier respect for their opponents. McVay’s team is so good that they don’t respect everyone like they should.
Seahawks: Russell Wilson comes back, but he comes back to play the Packers in Green Bay. He was getting the snot beat out of him before injuring his finger, he’s going to get the snot beat out of him again.
49ers: There’s still a second half to play, and two games against the Rams they can win—but the party’s over for Jimmy G. and HC Shanahan better have an Uber and a UHaul ready.

Stuff:
Packers: Zen Rodgers is always the headline, but the defense and running game are the story. Think about this, if the special teams isn’t a disaster they win in Arrowhead with Jordan Love. That’s because the defense—without Zaire Alexander—is dominating right now. Aaron Jones & AJ Dillon are every bit as dangerous as Chubb & Hunt in Cleveland.
Vikings: Dalvin Cook’s in trouble, Kirk Cousins is owed 35-rocks in 2022, and this team is dog paddling. Yeah, they got a shot against the Chargers this week, but blow it up. Give the Ziggy to Zimmer. Move on.
Bears: I know we’re supposed to be all in on Justin Fields after his performance against Pittsburgh. I thought Fields showed why he was a number one pick. But I don’t think the Steelers defense played well, and the failure of the special teams opened the door for Chicago to get back in the game. Heed the words of the Wolf for now. “Let’s not…” you know.
Lions: Speaking of the Steelers, they get the opportunity to hand the Lions they’re next loss. Looking at the rest of Detroit’s schedule, and factoring all the close calls and mental energy spent, I see a winless season. So bench Goff and clear the deck in the quarterback room. Meaning, make sure you don’t have something special buried on the depth chart. Then go to work on 2022.

Stuff:
Cowboys: It was a bad game, likely not to be repeated. But, it’s true, the ‘Boys can be handled up front and the secondary is no the Legion of Boom or Soul Patrol. They got beat by Teddy Bridgewater. (Drop Mic.)
Eagles: They’ve beaten the Falcons, the Panthers, and the Lions. And what are we supposed to do, get excited about a close loss to the Chargers? The Chargers are 25th overall defensively, and 29th against the run.
Giants: They’ve won three games, but if they knew how to win they could be 5-4. On a bye this week, but they could reel off wins in five or their last eight games. Not a bad team, they just need some re-wiring.
Washington: They don’t have a chip. Re-adopt the name “Redskins” and use the phony outrage to play the “Us against the world” card. Or pick a name that identifies best with DC. Something like, the “Washington Regulations” or the “Washington Mandates” or the “Washington Tax.”

Stuff:
Buccaneers: Back half of the schedule opens with an opportunity for a strong run. Saints were breathing pressure, but that pressure’s all gone. The defense has improved, pass coverage has gotten better…all that’s lagging is the pass rush. And that could derail them.
Saints: If Sean Payton can fix this…then he really is Coach of The Year.
Falcons: Matt Ryan is having a good year, and 30-year-old and Cordarrelle Patterson (with his fifth team) is playing in the backfield and have a terrific one.
Panthers: It’s turned into a bad year for Sam Darnold. But has someone who has rooted for Darnold, and seeing how bad he has played, is it wrong to have a sense of relief that something was cracked in his shoulder? Because maybe his biggest mistake was trying to play through an injury that should have put him on the IR.

Stuff:
Chargers: It stops and starts with the defense…just like it was in the days with Dan Fouts. A lot of pretty stuff offensively, but the defensive couldn’t stop a Pinto driving up Kellogg Hill.
Raiders: Las Vegas gets the Chiefs, Bengals, and Cowboys the next three weeks. A brutal season, is still all in their hands. They control their fate, and for the first time since the days of David Humm, I find myself rooting for them.
Chiefs: No…not a good team. They needed a special teams’ implosion by the Packers to win last Sunday. And they barely survived the Giants. No. I’m not buying. They need to get blown out big time for the wake up to sink in. And if I’m Derek Carr, I’m sending gift certificates to F.P. Santangelo (Aka: Daniel Sorensen) and begging him to do everything he can to stay in the starting line up.
Broncos: I owe Teddy Bridgewater and all the Broncos a debt of gratitude. Any team, in the position Denver was in, that goes into Dallas and crushes the Cowboys deserves my praise. It was like a Christmas appetizer seeing them Federally Pound the ‘Boys. They’ll do the same to the Eagles this week.

Coming This November (thru Amazon)
“A man who strays from the path of understanding comes to rest in the company of the dead.” –Proverbs 21:16

Stuff:
Ravens: They had to come back and beat the Chiefs, Lions, Colts, and Vikings. Any one of them, or all of them, could have been lost if not for a fortuitous fumble, kick, or opposing quarterback…and then what would we be talking about?
Steelers: This is the George Foreman of the NFL. An ancient heavyweight coaxing out of himself the last bit of juice he has. It’s kind of cool…Like a 90-year-old Jimmy Connors making a U.S. Open run. The Steelers are easy to root for, but I get the feeling they’re setting themselves and their fans up for a Tex Cobb like bludgeoning.
Browns: What toughness to lose at home to Pittsburgh and then go on the road and win at Cincy. You might not like them, you might not think much of Baker Mayfield (Who they should not extend), but you have to respect them. They made a great addition by getting rid of OBJ.
Bengals: Right back where they belong. Looking up in the AFC North. No comment to be made here other than it’s a perfect time for a bye.

Stuff:
Bills: After the Jacksonville game I actually thought I heard Gary Coleman’s voice. “What you talking ‘bout Willis?”
Patriots: The team has improved, the Bills have opened a door, the Patriots now have a shot in the East. The offense is just good enough to make them a threat in the crazy AFC. What happens to the universe if New England reaches the Super Bowl? What happens if they get there and Tom Brady is waiting for them?
Jets: To me, the Jets have got to get out of MetLife Stadium and reverse the mojo. Get an identity and get the West Side Stadium built. Right now there’s no identity and they’re living under some undisclosed curse.
Dolphins: We know what’s bad, but what’s good about Miami? They’re 26th in tackling, 21st in rushing the passer, 18th in coverage, and good against the run. Offensively they’re last in pass protection, and 26th in running the ball. They own the 49ers first pick in 2022 Draft, and a high second round pick.

Stuff:
Titans: This is a tough team with not as much talent as it seems. This must be they’re year because Julio Jones doesn’t look like he’s got much left, Derek Henry has a lot of mileage, and the rest of the AFC is like a career politician running for re-election—all over the place.
Colts: This week’s game is not a “give me” against the Jaguars. Carson Wentz’s solid season is being marred a very small number of spectacular mistakes. Don’t put your faith in the horseshoe.
Jaguars: Have fun, let it rip…Jacksonville has all its picks in the first three rounds of the 2022 Draft. They’ve doubled last season’s win total, and could, potentially, pick off two more. Successful season.
Texans: I thought the return of Tyrod Taylor meant they were going to be more competitive? If I’m a team looking for a solid backup to build on (Rams-cough, cough), I’d find a way to get Davis Mills.