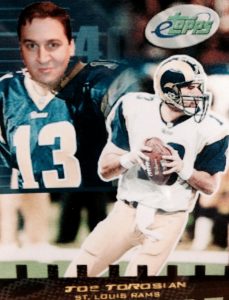 “My father once told me, ‘When someone wants you, Dale, appreciate it…Because they’re not always going to want you.’”—Dale Andrade, Tangent Dreams

I should have known since it was Monday, Les Snead was going to make a deal. Column interrupted. The Von Miller rental costs less than a rock and a couple of second day picks to open the door to a Super Bowl run.

Quick Note on Draft Picks: The Rams still own a Compensatory pick in the 3rd round of the 2022 draft for Brad Holmes hiring in Detroit. And they’re also likely to pick up a 4th round pick for John Johnson III’s signing with Cleveland and four 6th round picks for the free agents losses of: Moran Fox, Troy Hill, Gerald Everett, and Samson Ebukam. These go with a 5th and two 7th round picks already owned by the team.

As a born & bred Rams fan, it’s not natural to see, let alone dream, that your team will make big moves to win a title. But it’s happening—and before any Super Bowl success—this feels like the golden age of Rams football. (Super Bowl era)

The 70s team fed us heartbreaking defeat. The Greatest Show on Turf was only great for three seasons—1999-2001. Currently in the fifth season of the Sean McVay era, there’s no indication the organization is doing anything other than putting the pedal down.

Oh, by the way, I have always been a Von Miller fan!

It was great to see the Rams come out and do what they should. The offensive line was terrific, the defense gave nothing away, and Sean McVay invested in the running game. There’s not much to talk about–the Rams are good, and we know Houston is bad.

But here’s a thought or two.

I’ve left a couple of places of employment where I thought, “They’re going to miss me when I’m gone.”

They may have missed me—for a heartbeat—but life goes on. The sermon got preached, and the paper got published without me–including the sports section.

The Rams traded Kenny Young, and DeSean Jackson wants to be traded. And the world didn’t stop revolving, spinning, slowly down to die.

Life went on, life goes on. There’s still sadness and joy, but only God is forever.

Texans cornerback Vernon Hargreaves III made a nice play on Van Jefferson in the first half on a fourth and goal but was flagged for holding. It was a bad call, terrible. But on the very next play, the Rams didn’t hesitate. Matthew Stafford gunned the ball to Robert Woods for six.

Yeah, bad flag, but—I don’t care—sweep the leg. Love that about this team.

At about the nine-minute mark of the third quarter, the Rams wide receiver room got a little thin. After returning a punt, Tutu Atwell went out with a shoulder injury, then Jefferson limped off the field after his 68yd catch from Stafford.

It made me wonder if Jackson, watching from Los Angeles, thought a door was opening for him. But instead of ringing DJax up, making peace and promises, McVay put the 249th overall pick of this season’s draft in the game—Ben Skowronek.

Skowronek caught three passes for 30yds and two first downs. In his career, the 6-3/224lb receiver has three more catches and 30 more receiving yards than the 57th overall pick in the same draft. Some guy named Atwell.

As great as the Rams are looking, is anyone a little bit worried about John Wolford? Yes, he got a big win over Arizona last season. Yes, he’s only taken 19 snaps this year and only thrown four passes. But he hasn’t looked good in any of those snaps.

I don’t know how much money the team has left to spend, but if I were Snead & McVay, I’d be wanting a better insurance policy behind Stafford. I appreciate the Wolf, but maybe it’s time to say thank you and goodbye.

The defense got in and got out without injury. It pitched a shutout (let’s be honest) and picked up five sacks.

Is there an Achilles not related to the backup quarterback position? Yes.

Special Teams. The Rams’ kicking/punting/return units have not been all that special beyond the guys who boot the ball.

It’s a Super Bowl contender’s version of a first-world problem. You know your team is good when you start wishing they had a better punt returner. Also, giving up two onside kicks in two weeks to the two worst teams in the NFL is terrible.

Around The NFL:
I’d like to see Davis Mills with talent around him. I’m not saying the Houston quarterback is an all-pro in the waiting, but he could be the next Mac Jones.

I think Jared Goff has sucked out the Lions’ will to live. Detroit looked emotionally exhausted against Philadelphia.

Regarding the Bengals-Jets, what in the name of Bruce Coslet was that all about? Honestly, if I were a Cincy fan, I would have thrown a brick through the flatscreen. And that helmet-to-helmet call! Heavens gates and Hells flames! Unbelievable.

Is there a greater horror for a Minnesota Vikings fan than to see Kirk Cousins, under pressure, backing up to throw the ball? Especially on Halloween! Jack Nicholson with an ax isn’t even that scary.

Inglewood beat Morningside High School 106-0 this weekend. I don’t know why the Inglewood HC would leave his starters in and have his quarterback keep throwing. Forget about the cruelty or lack of sportsmanship…whatever…if that moves your needle. It’s just a bad risk in terms of injury and self-inflation.

From the Morningside perspective, if I’m the coach—I don’t have a thought about Inglewood running up the score. But what a great opportunity—through sport—to teach the life lesson of the world being hard, harsh, and cruel. And to not expect some man-made entity to guard you and protect you from the hard, the harsh, and the cruel.

If you want my personal story about how hard, harsh, and cruel life can be, ask me about it sometime. I may have suffered in a moment because of something stupid someone else did, but I’m only a victim if I keep living in that moment.

Instead, I learned to do whatever was necessary to never be put in that position again. That’s life, and to learn that lesson through sports is a blessing–albeit in disguise.