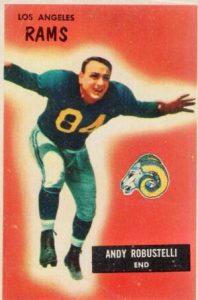 Draft choices and trades have a residue, and that residue can create a thread that will stretch across decades and seasons.

Drafted by the Rams (19th-round, 228th-overall) in 1951 out of Arnold College. Robustelli was a seven-time Pro Bowl selection and named All-Pro six times.

He was inducted into the Hall of Fame in 1971 along with Jim Brown, Y.A. Tittle, and Norm Van Brocklin.

Awesome, but then it gets interesting.

Robustelli was traded to the New York Giants in July of 1956 for a first-round pick in the 1957 Draft. 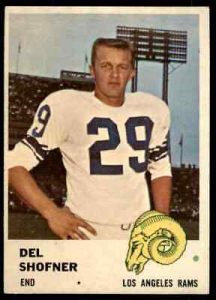 That pick was 11th-overall, and the Rams took Del Shofner as a replacement for the retiring Tom Fears and aging Elroy Hirsch. Shofner was terrific for a team in decline in the last half of the 1950s.

In 1960 Frank Gifford was blasted by Philadelphia Eagles linebacker Chuck Bednarik and considered to be one of the most violent hits in NFL history.

Gifford missed the entire 1961 season for a Giants team that was perennially contending for an NFL title. So in August of 1961, the Giants offered the Rams a number one draft pick for Shofner.

The Rams made the deal and took Roman Gabriel with the second overall selection of the 1962 draft.

Gabriel was the Rams starting quarterback for much of the 60s and developed into a star going to four Pro Bowls and winning league MVP in 1969. 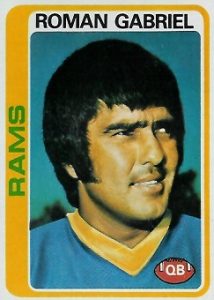 On June 8, 1973, Gabriel was sent to the Eagles for Harold Jackson and short-yardage fullback Tony Baker. The Rams also received first-round picks in 1974 & 1975–and a third-round selection in 1975.

(In Review: Robustelli to Shofner to Gabriel to Jackson) 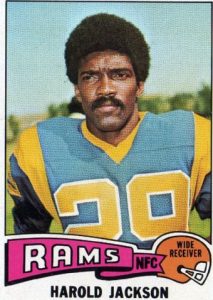 In 1980 that fourth-round pick was paired with tight-end Charle Young and a third-rounder to San Francisco. The Rams got back #58-overall in the 1980 draft and took Jewerl Thomas. As well as the #63-overall in the 1983 draft.

With Eric Dickerson & Barry Redden in the fold, Thomas, in 1983, was traded to Kansas City for starting CB Eric Harris. Harris played three seasons for the Rams, two as a starter, before a back injury forced him into retirement.

The #63 overall pick (Obtained in the Young deal) was sent to the Giants for Gary Jeter. Jeter played six seasons for the Rams as a rotational player and collected 45-sacks.

Cappelletti missed the 1979 season with an injury. In 1980 he was traded to the San Diego Chargers for a second-round pick in 1982.

That pick was included with three others and sent to the Redskins for the 14th-overall pick in 1982. The Rams drafted Barry Redden.

Redden never becomes a star for the Rams and, in 1987, is sent to the Chargers for Buford McGee and a second-round draft pick. That pick becomes Flipper Anderson. 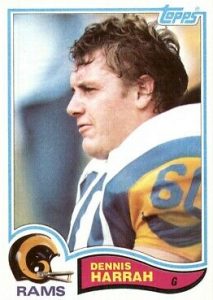 ***
The Dan Nugent Thread:
The 1975 third-round pick for Gabriel was Dan Nugent. An offensive lineman, Nugent lasted one season and was traded to the Washington Redskins for a second and third-round picks in 1980.

The second-round pick (#50 overall 1980 Draft) turned into Irv Pankey, who became the starting left tackle through 1990.

In 1991, Pankey was traded to the Colts for two draft picks. In 1992, #57-overall, the Rams took Marc Boutte out of LSU. He becomes a two-year starter at defensive tackle.

***
Then on February 16, 1995, Flipper Anderson became an unrestricted free agent and was signed by the Indianapolis Colts.

And the thread that began with Andy Robustelli in 1951 came to a close after 43-years.